I had an opportunity to speak with Surge this afternoon and in the course of our conversation mentioned to him a particular fitting session that I had today with a long drive competitor.  He asked me to share this information with the PPGS readers.  We think you will find this eye opening.

We have watched as driver heads have gotten bigger and bigger over the course of the past few years.  Something that has also been happening that has not been as well publicized is that shafts have also been slowly getting longer.  Four years ago the average driver shaft length sold in retail shops was 45”.  Now you can find drivers with shafts that are over 46”.  A question that still begs to be asked is similar to one we asked about driver size.  If big was so much better, then why weren’t fairway woods getting proportionally bigger also?  So, if longer is better, why aren’t fairway wood shafts getting longer as well?

What the equipment companies will tell you is that by having longer and lighter shafts you can swing faster.  In the first place, the error here is that it’s not your swing speed that is important rather club head speed.  Let’s suppose that I gave you a stick that’s 2 feet long and one that’s 6 feet long and asked you to swing them, which could you swing faster?  If you said the 2 foot stick, you are correct.  So, if you can swing the 2 foot stick faster, it would also stand to reason that you would generate more speed at the end of the stick, in the case of a golf club, club head speed.  Let’s say that I also ask you to take the 2 foot and 6 foot sticks and quickly touch a mark on a wall.  Which do you think you can move more quickly and accurately?  If you said the 2 foot stick, right again!

I have proven that shorter shafts very often allow the golfer to generate more club head speed on many different occasions.  But the experience today was by far the most eye opening event that I’ve had the opportunity to participate in.  Let me first say that my client just won a regional long drive qualifier with a drive of over 350 yards into a 20mph head wind.  Folks, this is quite impressive.  What is even more impressive is that he did it with a driver that is anything but a standard long drive driver.  A standard driver used by most LDA competitors measures 50” when stood on its tip and measured to the end of the grip.  This equates to 48” when placed in the normal soled playing position.  Also, most of these long ball hitters are using lofts of 6* to 8*.  The winning drive that my guy hit was accomplished using a 44” driver with a loft of 9.5*.  This is amazing.  I can’t even begin to tell you just how amazing.  He said that he got all kinds of strange looks with such a short driver until he hit in competition.

In the fitting today, I tested him with 3 different lengths.  They were  44.5”, 45”, and 45.5”.  He hit every drive with all three shafts dead center every single shot.  This is amazing in itself that he has that good a swing.  Usually long drive guys aren’t known for great swings.  However, he has one of the most perfect vertical swings that you’d ever want to see.  When we finished testing and the data was assembled, we found that his club head speed was indeed higher with the shortest shaft.  Also, when he reached back for a little extra, he was able to keep the short shafted driver well within the grid but with the long shafts the ball would “spray” and control became an issue. Fair warning to long driver guys out there, if 350 yards into a 20mph wind was obtained using a 9.5* driver with too much spin, just wait and see what’s going to happen with lower loft, lower  spin, and a little dinky short shaft.

So, I ask, is longer better?  I don’t think so!  Ask yourself this question also.  If the average driver length of the best players in the world is only 44.5”, why are equipment companies trying to shove longer shafts down our throats? Why are  they trying  to convince us that long shafts hit it longer.  Remember, longer clubs can only hit it longer if you are able to swing the longer club as fast and hit it as solid.   As most of you know by now, this is not the case particularly with the vertical swing.

Our facility is an individualized service operation. All fittings and lessons are done by appointment to ensure the best and most efficient use of our customers’ time.

All fittings and lessons are on a scheduled appointment basis.

Please call us at 803-798-1030 to discuss your particular needs and to schedule a convenient time to come in!

We are now able to offer long distance fitting to those not able to come to our Fitting Studio. To learn more please visit our Long Distance Fitting Page. 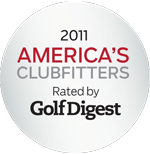